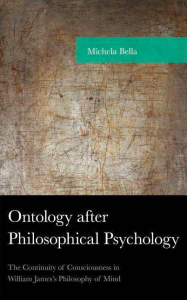 We are happy to announce the publication of Michela Bella’s book, Ontology after Philosophical Psychology (Lexington 2019).

Ontology after Philosophical Psychology addresses the question of William James’s continuity of consciousness, with a view to its possible actualizations. In particular, Michela Bella critically delineates James’s discourse. In the wake of Darwin’s theory of evolution at the end of the nineteenth century, James’s reflections emerged in the field of physiological psychology, where he developed for the case for a renewed epistemology and a new metaphysical framework to help us understand the most interesting theories and scientific discoveries about the human mind. Bella’s analysis of the theme of continuity makes it possible to appreciate, both historically and theoretically, the importance of James’s gradual transition from making observations of experimental psychology on the continuity of thought to developing an epistemological and ontological argument that continuity is a characteristic of experience and reality. This analysis makes it possible both to clarify James’s position in relation to his historical context and to highlight the most original results of his work.